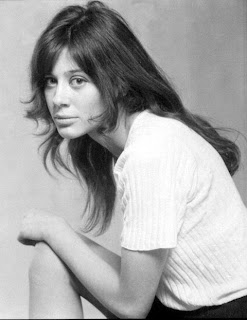 In the young part of this decade (i.e. the "wake up 2-early-thousands") I worked for an import music distributor. It was great cause I pretty much chatted on the phone about new releases and re-issued records to store owners all day and got some great promo's. One of them was this VASHTI BUNYAN - Just Another Diamond Day CD. I head it and was so confused by it I hated it but I was selling copies to all of these collector freak record shop dudes. I listened to it a few more times, and still didn't get it. That promo ended up in a stack of stuff to trade in at AARONS records in Hollywood.
Fast forward 6 years to 2007. I was at AQUARIUS records digging in the dollar boxes (the first place to shop in any store) when I saw that odd sounding name VASHTI BUNYAN again. I thought "Fuck it. $1 isn't too much to give this a second chance" and I picked up a promotional copy of "Some Things Just Stick In Your Mind". When I got home I realized that this wasn't the same album I'd had before, but a bunch of singles, b-sides and demos. I listened to it and half way through was completely taken with the rawness and honesty of the sound. While the album i'd heard a few years back had a cleaner, late 60's pop production on a budget feel and sound, the demo material is a much more minimalist. From track 14 on Vashti's haunting voice lies right on top of a steel string acoustic guitar that sounds like it was all part of a one take practice demo. Anyhow check this shit out and if you hate it.... Gimme a minute and I'll post some shit your gonna dig.
http://www.mediafire.com/?g1ijmj5wxmj
P.S.
R.I.P. Don Steele
R.I.P. Grand Master Roc Raida
Posted by ApocalypseWestCoast at 5:11 PM