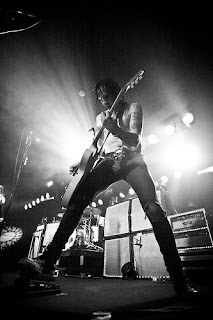 The Backyard Babies are a real odd band for me to like. They sound of like a blend SOCIAL DISTORTION, and GUNS N ROSES (which are two bands that I hate more than anything) doing mountains of blow and telling stupid jokes (two things which I enjoy). Anyhow, for some reason all of their singles and the TOTAL 13, MAKING ENEMIES IS GOOD, and STOCKHOLM SYNDROME albums which these Mike Ness and Slash worshiping powderheads released still gets played pretty regularly by me. I still like singing alog to it and playing air guitar to it. So check out this live bootleg, then go buy some of their stuff.