Manchester According To Mr. Welsh 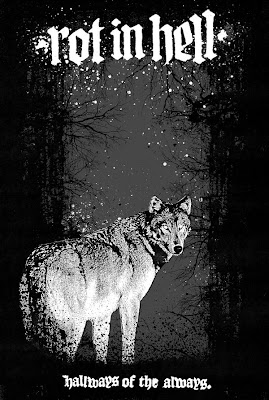 Mr. Sean Welsh plays in a band called ROT IN HELL from England and (like the rest of us) was made out to be a citizen of Ohio. While he and I disagree on who the greatest football team in Manchester is, we both agree on the STONE ROSES being gods, and the guy who wrote this article being a dipshit. Here are Sean's original answers.

Sean Welsh: Filter out the superfluous peripheral distractions and really listen. You are dug in and pinned down in the middle of a mine-strewn battlefield and the enemy has called in an air strike. We, on the other hand, are behind enemy lines preparing the way, weakening bridges and priming our ambush. The sleeper cells are stirring, equipped to wage a guerrilla war against humankind. In other words, we are mere hair’s breadth from realising our objectives. You should confront the lie that you live in.

Terrorizer: ‘Holy Terror’ was always associated with anger and apocalyptic feelings. Looking back at the 90s, from where do you think these feelings spawned? Was it the same place thrash bands who were singing about alienation and impending nuclear holocaust, but presented in a much more nefarious and prickly manner?

Sean Welsh: No, your analogy is misplaced. We inhale the corrupted air of the Tokyo subways, not the adolescent radioactive fantasies of Bay Area beer-bongs. We listen to the wisdom of Sakevi Yokoyama and Pentti Linkola, not the fripperies of Belladonna and Mustaine. We are students and apostles of Armageddon, not of a heavy metal genre.

Terrorizer: Where did the name “Holy Terror” originate? Some say it was Dwid’s label, others claim it was Brian from Catharsis and his ‘zine Inside Front. I, personally, don’t remember the term being that widely used as a genre describer. Was it?

Sean Welsh: Your assertion that Dingledine coined the term holds water, however, when used contemporaneously in association with Holy Terrorism as a description of a particular sound, it is done so in error, ignorance and “without honour or soul”.

Sean Welsh: The simple answer would be Integ, a more complicated answer would involve misappropriation of the term, however, there must be other individuals better placed to answer this question since we hail from the north of England not Cleveland, Ohio. In any event, Holy Terror and Clevo have only the most tenuous and historical relationship, if any at all.

Terrorizer: In descriptions, I’ve seen ‘holy terror’ described as one of the original permutations of metalcore in the sense that it combined metal and hardcore influences and did it in a way that differed from crossover. Agree/disagree?

Sean Welsh: Disagree. “Metalcore” is considered a nauseating malapropism by all Holy Terrorists.

Sean Welsh: To reiterate, Holy Terrorism is not concerned with a sound, but rather an action.

Terrorizer: ‘Holy Terror’ appears to not just be a loose quip designed to describe music, but an entire aesthetic involving a certain lyrical style and artwork, which often made use of original paintings/artwork from the 1700’s and 1800s. Once again, agree/disagree?

And was this all-encompassing aesthetic what kept the sound/scene from gaining ground in terms of popularity and also limiting the number of bandwagon bands?

Sean Welsh: We indeed draw strength from expression of individual thinking which may include, but it goes far beyond lyrics or artwork. With specific regard to art, the contemporary work of Stephen Kasner and Give Up for example, are fundamental facets of Holy Terrorism.

Popularity is not our concern or objective and has no place in Holy Terrorism. That the overwhelming majority have neither the vision, nor disposition to comprehend or appreciate Holy Terrorism is a validation in itself. You may consider us marginalised, outgunned and outnumbered, but remember, we are not in here with you; you are all in here with us. In other words, we are the Ouroboros in your midst.

Terrorizer: This is kind of related to the question above, but…. Why do you feel ‘holy terror’ as a sub-genre never became a household name and/or never took off; not necessarily of popularity, but of more bands openly referring to themselves as such? Was it a matter of terminology; like the term metalcore was a bit easier on the brain, but then ended up taking on a totally different meaning?

Terrorizer: What was up with Gehenna?

Sean Welsh: In what respect? I’m sure Mike Cheese would be happy to answer your questions with regards the Infamous Gehenna.

Terrorizer: To what do you attribute the slight resurgence that we’ve seen in the use of the term ‘holy terror’ with respect to re-issued records and the bands playing the style?

Sean Welsh: Some individuals have referred to a ‘Rebirth of Holy Terror’ since soon after the turn of the century, however, it never in fact went away. In recent years Mr Abernathy has reached out and amassed a worldwide network of comrades and cohorts who are poised and committed to the cause. It's always there, the beginning and the end.

As the wolves, or rather pigs closed in they appeared to consider us encircled and embattled. Distracted and aroused as they were, some of our number simply vanished from under their snouts and reappeared elsewhere and everywhere. Undoubtedly they scratched the surface, but what of it? It only added to their misperception, little did they know, little do they know, little will they ever know other than what we choose to feed them, drip, drip, drip.

Terrorizer: Who are some of the more recent bands that have popped up that you feel faithfully capture the spirit and sound of ‘holy terror’?

Sean Welsh: Integ, Gehenna and Pale Creation continue to rend the world asunder. In their wake Vegas, Roses Never Fade, Horders, and Withdrawal will change your life and understanding of it upon its head if only you so desire.

Go here and download some gunpowder (including ROT IN HELL) http://www.holyterror.com/downloads/ then on Sunday listen to it while Sean an I trade insults about soccer via the internet.

Posted by ApocalypseWestCoast at 3:38 PM