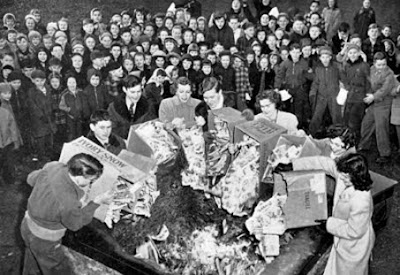 This guy from Terrorizer Magazine wanted to interview some friends and I "to find out what Holy Terror is really all about", and find about "where GEHENNA and other HOLY TERROR bands fit in the metalcore" scene. In reality he wanted to tell the world what he believes Holy Terror is and add some quotes in to the article to give it some credibility. For some reason he thinks the "secret ingredient" to harsh music is the city of Cleveland Ohio. I mean, fuck man, I like the DEAD BOYS, and the PAGANS, but will they ever really matter to me as much as the STOOGES? Answer to that is "NO". Anyhow I'm re-printing the Q and A session he and I had because the article he wrote suggests something different.
Anyhow... enjoy the real interview and feel free to stop by the news stand and strike a match to the one that is in print.

Mike Apocalypse: I’ve went over this a thousand times with a million people, and I think we know what it is... Brian Dingledine was a writer who used this adjective, and noun to describe the feelings he had when he heard this music that happened to be made by some outsiders. Another guy came to town and used it to cloak what was going on in the world so we could do what we do when we do it. In other words it’s the world that people don’t love anymore and we’re just the guys that needed to sing these songs. You know, we’re just the air and water and trees and animals and we’ve been here for a long time. So when we talk to each other we’re just saying the beliefs that are as old as the hills... No one wants humans around anymore.

Terrorizer: ‘HT’ was often associated with internal anger and apocalyptic imagery. Looking back at the 90s, from where do you think these feelings spawned? Was it the same place thrash bands who were singing about alienation and impending nuclear holocaust, but presented in a much more nefarious and prickly manner?

Mike Apocalypse: Are we angry inside? Are we painting pictures of armageddon? Did this start in the 90’s? No man. You got it wrong. We’ve been here doing this thing for a long time. We sang songs as a baby in a church in Northern California, and we’ve wrote sonnets from the gutters of New York City before we could spell. We were riding on the train in Japan in 1995, and we were down in the jungle in 1978. We were out in Death Valley on those burning hot plains, and we were flying in to New York on those burning hot planes. Ya dig? We’ve been on trips through this country and the whole damn world with our brothers and sisters since before your imagination could begin. We’re part of a pack thats run through here. And people seen us and got the idea to ask us a question. We aint worried about an impending holocaust baby, we are the impending holocaust.

Mike Apocalypse: Can you tell me how words are going to make a difference? They aren’t. Thoughts and actions make the difference. A revolutionary act is something a nihilist wouldn’t be part of. He wouldn’t stretch himself out to feed you with knowledge would he? No cause baby, he hates the world. We love the world, it’s the people we aren’t to fond of around here. We want to encourage people to show how much they care and lay down their lives for one another. To give up. To not focus on how they are going to save time, but how they are going to spend their time. My friend Jack told me to “take hold of forever before it takes hold of you.” Thats how we’re gonna do it. With action. With knowledge. With song. With love in our hearts. We aren’t gonna just get mad, and tell you to get mad. We’re gonna get right, and tell you how to get free.

Terrorizer: Where did the name “HT” originate? Some say it was Dwid’s label, others claim it was Brian from Catharsis and his ‘zine Inside Front. I, personally, don’t remember and don’t the term being that widely used as a genre describer. Was it?

Mike Apocalypse: I told you earlier about a Brian Dingledine and his magical magazine that printed a word which ended up as a cloak. Dwid wasn’t using the term to describe music when he started his label. He was setting up a printing press and record label to tell some truth, and sell some truth.

Mike Apocalypse: I think you maybe mistaken. Cleveland was only INTEGRITY’S base of operations, for a time (a long time). When things got hot and the government tried to hit everybody with an injunction Dwid flew the coup. GEHENNA formed splinter cells like SANGRAAL, WITCH-LORD, DISCREET DOLL BAND, and DEVIL. I assure you though there is no sound to Cleveland. BONE THUGS, Boz Skaggs, and Gerald Levert are all from Cleveland. They never affected how GEHENNA sounds. As far as style... I was born in Detroit man. I was born in the Mecca of style and sound. STOOGES, MC5, NEGATIVE APPROACH, Joe Louis, Bruce Campbell... Need I say more.

Terrorizer: In descriptions, I’ve seen ‘HT’ described as one of the original permutations of metalcore in the sense that it combined metal and hardcore influences and did it in a way that differed from crossover. Agree/disagree?

Mike Apocalypse: No. I would not agree or disagree. I would ignore that statement. That is a statement that was more than likely made by some guy who was trying to demean the movement into a type of music. If it were said that we’ve drawn on influences from bands that played a certain genre of music in order to create our art and spread our word of total human annihilation, I might say “mmm. Yeah man. Your picking up what we’re laying down.”

Mike Apocalypse: We have no sound. We only bare a message “The Gift Of Extermination.”

Terrorizer: ‘HT’ appears to not just be a loose quip designed to describe music, but an entire aesthetic involving a certain lyrical style and artwork, which often made use of original paintings/artwork from the 1700’s and 1800s. Once again, agree/disagree? And was this all-encompassing aesthetic what kept the sound/scene from gaining ground in terms of popularity and also limiting the number of bandwagon bands?

Mike Apocalypse: You’re getting warmer. What happened is that we all want to tell people that the world would be a better place without them in it. Humans need to be destroyed. This seems to be a turn off to a lot of humans. Truth like that is hard to swallow, and we don’t need anymore friends. That’s not why we do this. We don’t want a scene. We just want it to all end. We aren’t pushers man. We’re users. We use life and abuse life, and want to burn it all up. If somebody says I’m a hedonist then that’s fine. I don’t care man, cause all I know is that I’m not trying to be anyones anything. I’m doing what I need to get what I want, and if that breaks hearts what can I do?


Terrorizer: This is kind of related to the question above, but…. Why do you feel ‘HT’ as a sub-genre never became a household name and/or never took off; not necessarily of popularity, but of more bands openly referring to themselves as such? Was it a matter of terminology; like the term metalcore was a bit easier on the brain, but then ended up taking on a totally different meaning?

Mike Apocalypse: It isn’t a sub-genre. GEHENNA isn’t trying to sell you on a fashion or a “sound.” That is why a lot of people never liked us. We don’t have anything for them. We won’t do what they want or act how they want. GEHENNA is GEHENNA. We turned the television off and handed you a knife and said “use that right or I’m gonna take it from you.” We taught you how to write and gave you a pencil and said “send this letter to the world or I’m gonna erase your words.” You cant do that in every house cause even if you own all the houses you can’t shut all of the televisions off.

Terrorizer: To what do you attribute the slight resurgence that we’ve seen in the use of the term ‘HT’ with respect to re-issued records and the bands playing the style?

Mike Apocalypse: We formed splinter cells. We painted new pictures that had the same subject from a different angle. This led to people asking why we’re still here and why we still aren’t friends with them. The things we love caused jealousy and confusion. People asked “how could I be part of this?” and I could only answer them with “I don’t know what your talking about.” The style or sound you are insinuating exists simply does not exist. The word and message of the band I’m in does. As far as a resurgence... It’s been a little while since we seen something big. But it’s gonna come around, and man will learn to love again, and lay down his life, and forget about selling his style, and start telling the truth.

Terrorizer: Who are some of the more recent bands that have popped up that you feel faithfully capture the spirit and sound of ‘HT’?

Mike Apocalypse: There is no sound. The idea of sound was abandoned a long time ago. There is only a message. Release yourself from the prison of life. Take hold of forever.
Posted by ApocalypseWestCoast at 4:41 PM