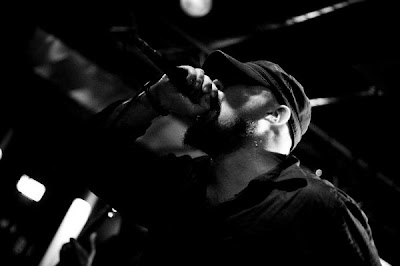 Those are the 3 most important things to keep in mind when you are buying a house, opening a business, or writing a piece of yellow journalism for Terrorizer magazine. Here is the interview Terrorizer did with Dwid from INTEGRITY. Note that his answers as well as Sean's, T's and my own are similar when we're asked about Cleveland. I'm posting these interviews to make a point. An article titled "Hello Cleveland" makes no sense at all. Check out Dwid's answers then go download a ton of good music from the link at the bottom. Then go get a brick, write the words "Go fuck yourself" on it, and throw it through the window of the offices of Terrorizer Magazine.

Dwid: Holy Terror does not wish to use this interview as a recruitment campaign to gain an even greater following. We will respond to your questions as a courtesy, and if any of your readers that wish to learn more, they would be served best by reading between the lines.

Terrorizer: ‘Holy Terror’ was often associated with internal anger and apocalyptic imagery. Looking back at the 90s, from where do you think these feelings spawned? Was it the same place thrash bands who were singing about alienation and impending nuclear holocaust, but presented in a much more nefarious and prickly manner?

Dwid: Our music is created as an act of religious terrorism. We long for absolute genocide. Our music is not peace punk. We are human racists, we are against the human race.

Dwid: We do not feel that life is meaningless, but that we are prisoners in flesh incarcerated in the hellish world. We are striving for a means to eliminate these confines and free all of the souls imprisoned on this dying shell. However, I must confess my adoration for historys greatest nihilist, Francis Bacon.

Terrorizer: Where did the name “Holy Terror” originate? Some say it was your label, others claim it was Brian from Catharsis and his ‘zine Inside Front. I, personally, don’t remember and don’t the term being that widely used as a genre describer. Was it?

Dwid: Holy Terror was a term first used by Inside Front magazine in the early 1990s in an attempt to describe the musical sound and lyrical content for bands like Integrity and Gehenna. Defining, in simpler terms, musical terrorism with an extreme religious manifesto. Jack Abernathy felt that, 'Holy Terror' would be an ideal new moniker to conceal previous incarnation of His movement. His earlier manifestation of the movement had garnered too much negative investigation from the authorities/media. Their witchhunt deemed that a change of name and identity was necessary for the survival of the movement.

Terrorizer: In the same way that New York had NYHC and the Bay Area had its thrash, Cleveland and a fair share of bands from the city became associated with the ‘holy terror’ sound.

Why was Cleveland such a focal point for this style/sound?

Dwid: We have nothing in common with those groups. Holy Terrorists are more akin to the passionate music of Mansons glorious Family and the uncompromising French zealots, Les Legions Noire than to those which you have referenced. A geographical location such as Cleveland offers no significance to HT.

Terrorizer: In descriptions, I’ve seen ‘holy terror’ described as one of the original permutations of metalcore in the sense that it combined metal and hardcore influences and did it in a way that differed from crossover. Agree/disagree?

Dwid: I have no idea about the origins of that genre of music. My interest in metallic punk/hardcore derived from G.I.S.M.

Dwid: HT is not a sound, it is a weapon.

Terrorizer: ‘Holy Terror’ appears to not just be a loose quip designed to describe music, but an entire aesthetic involving a certain lyrical style and artwork, which often made use of original paintings/artwork from the 1700’s and 1800s. Once again, agree/disagree? And was this all-encompassing aesthetic what kept the sound/scene from gaining ground in terms of popularity and also limiting the number of bandwagon bands?

Dwid: I believe you are alluding to H. Bosch. Bosch was able to see beyond the veil that was placed upon our eyes by the demons. His painting illustrate the actual reality of this hellish world. In the same sense of this Flemish master, we also illustrate what we see beneath the veil in order to convey our beliefs. There has never been any interest in popularity. We are creating for our own selfish reasons and rituals.

Terrorizer: This is kind of related to the question above, but…. Why do you feel ‘holy terror’ as a sub-genre never became a household name and/or never took off; not necessarily of popularity, but of more bands openly referring to themselves as such? Was it a matter of terminology; like the term metalcore was a bit easier on the brain, but then ended up taking on a totally different meaning?

Dwid: There is no interest in this.

Terrorizer: Specifically in your last email, you mentioned our “only salvation being the total extermination of the human race.” I’m presuming this also includes yourself, friends and your loved ones? If existence is such hell, why do you yourself go on? Or is it your position to make the general populace’s existence that much more uncomfortable with your time allotted?

Dwid: Yes, the extermination of the entire human race in one loving act. This is the only way for salvation. This flesh is an abomination, a rotting prison cell.

Terrorizer: To what do you attribute the slight resurgence that we’ve seen in the use of the term ‘holy terror’ with respect to re-issued records and the bands playing the style?

Dwid: Recordings are re-issued when the original recordings are no longer available. We will not be held accountable for others choosing to emulate our musical creations.

Terrorizer: Who are some of the more recent bands that have popped up that you feel faithfully capture the spirit and sound of ‘holy terror’?

Dwid: We know who We are

Posted by ApocalypseWestCoast at 5:55 PM