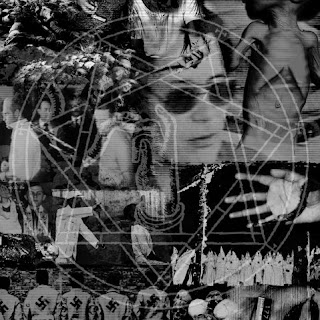 A few posts back I talked about BLIND TO FAITH.
When Ol' Nabbe The Bastard sent me this I wasn't too sure what to expect I just thought it was gonna be an average hardcore record. I was SOOOOOO wrong! Rob Nabbe (the drummer and heavy drinker of the band) sent me a copy of the album. I haven't copied it or even played it for anyone, but I've listened to it non-fucking-stop! Now it's just about to come out, and while there is a little time left to pre-order the limited LP, I thought I'd take this time to write something like a record review and take you folks through a track by track analysis of what happened in my head when I first heard this and why this record is so goddamned amazing. Grab a drink and some snacks....

When "The Seven Fat Years Are Over" starts there is less than 2 seconds of shrill guitar feedback. It reminds me of the sounds of a cars breaks. This is what the music on this record looks like in your mind when you close your eyes and listen to it.

An unmarked van screeching to a halt behind you, and as you look over your left shoulder, you see the the doors slide open and watch as guns are raised in your direction. That is when the fire fight starts for real! Whirlwind drums and blinding guitars fire round after round into the air while the dogs held at bay are barking viciously. The Sgt. yells "Kill On Sight" orders to his squad for the next 45 seconds. Just as you think the nightmare is over and you've escaped by climbing into the recesses of a tight alleyway, the voice of Sgt. Stijn grunts "Alright". The BTF death squad begin to spread slowly through the alley ready to end your life. They rip through and pass you, but just when you think you've lost them the choppers swoop down. The chopper pilot yells through bull horn countering Sgt. Stijn's orders for you to surrender. As the BTF Death quad search the wet grimy streets you know you may not be able to run much further and as you hear them closing in, Stijn threatens you with "Suffer the loss of all your hopes and dreams. The end is drawing nearer and nearer". Your know your fucked. Your caught. You lose consciousness from the course, relentless beating. Waking up in a cold sweat strapped to a table in a dark room you think "I feel the hands, their wrapped around my neck" the interrogation, and torture begin. rubber hoses beat your flesh while bolt cutters snap away at your fingers. Cruel and primitive surgical devices lance your skin, while white hot metal stabs the wounds to cauterize them and stop the bleeding. The pain takes you within an inch of your life. Death would be a saviour now as the lights start to dim. Your cold and growing colder by the second. Trapped some where between hell and hallucinations the voices of your tormentors bleed into your own thoughts and meld with the demons that are inside you. As they call your name speaking in a forgotten and primal language the visions of suicide, homicide, and genocide create fuel to feed the dark and benevolent forces that climb through your thoughts. You give up hope for freedom and embrace the fact have been transformed into a member of their death squad killing cult. Now there is no god or Satan. There is only the will to live by conquering and destroying. You've become BLIND TO FAITH.

This is pretty much side 1 in a nutshell. Put your drink down, and wipe the cheeto residue from your fingers. It's time to see for your self.

Click this link to listen to a couple of tracks.


For real. Just do it!
Posted by ApocalypseWestCoast at 12:05 PM