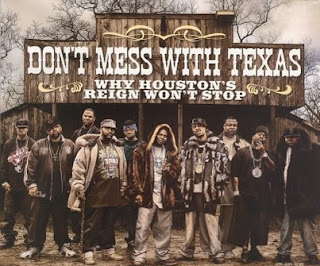 In 1999 there was an explosion in Hip Hop that changed everything. JAY Z's "Big Pimpin'" single reintroduced the world to the great state of Texas via the brilliant flows of BUN B and PIMP C (Rest In Power). See, although Texas was the home of some of the greatest rap records to ever come out, the music industry wanted to ignore it all together. Texas wasn't even considered an urban "market" at all until some record label asshole realized that the rap scene there didn't die at all, it just went underground. The independent labels, emcees, and D.J.'s just decided to say "fuck the industry" and just do everything themselves, and were slanging mixtapes all across the south. Some of these cats were putting 100,000 mixtapes into the streets, while the major record labels were pushing a bunch of fake shit and throwing up some fucking bricks. Anyhow from "Big Pimpin'" on, the major label dickheads got greedy and started hunting the southwest for the dudes who were selling the most mixtapes. They signed as many motherfuckers as they could and by 2004 ALL of those folks records came out! Honestly man, 2004 to 2005 was fucking nonstop H-Town releases. Every major was trying to get at J-Prince to sell Rap-A-Lot, after just a few years before that, they were telling him the only thing that they ever wanted was the GETO BOYS. Anyhow this dude DJ ELEVEN from New York dropped this mixtape in late 2005 as a bonus disc for the DJ AYRES "Houston For Dummies" mixtape (which is damn good too, except for the fact that he left out the CONVICTS, GANKSTA NIP, the TERRORIST'S, DOPE-E, K-RINO, on a mixtape of Houston legends). Anyhow....
So you should do what I'm gonna, and fire up a joint, spill some liquor out for my dogs that aren't here anymore, then raise my cup to ScrewSton Texas, and listen to this shit.
Click the link to get it.