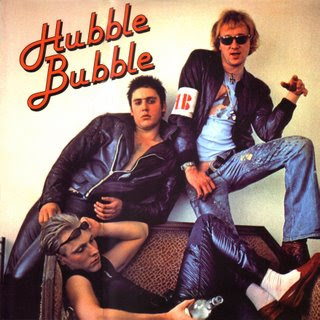 These turds are some of Belgium's finest, and earliest punks. Like CHAIN SAW, The ONION DOLLS, and The KIDS, these dudes came from a time when there was no formula for how to make a punk record. The vocals on each song go from harsh yelling to over the top corny elvis impressions, to snarling growls, to snotty whining nasal howls. The music does quite a bit of changing through out the record too. There are all of the typical STOOGES, and RADIO BIRDMAN, DAMNED, etc. influences but there are also a lot of odd things in there too. It almost sounds like these guys wanted to put 60's R&B, into the music too. There are songs with odd keyboard parts, whistling, gang chant choruses, new wavy buzzing solid state guitar tones. I think they wanted to play something that was just gonna fuck with anybody who listened. This was their first LP released released in 1978. They had a second record called "Faking" and a couple of 45's too but broke up so their drummer could go on to New Wave stardom as PLASTIC BERTRAND. Anyhow if you haven't heard this I suggest you click the link below and get ready to have a new favorite record. Oh yeah, they actually play the same song twice at the end of the album, It's not a mistake.