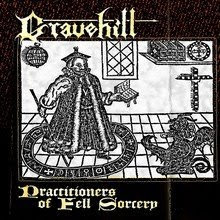 Yeah I know I stole the image from Der Pope...
Yeah I know I told R.T. and Mikey that they had to tell Aesop to stop making this cassette cause Shane BastardDemon was upset...
And yeah I know that I told a lot of my friends that I would never post this, nor would I let anyone else...

But look I figured since Damn Shane BastardDemon and I own 66.6% of the rites for this recording, and I just got an email from Rhett and Mikey today, I'd post this before somebody else does and the story gets all screwed up and people start telling other people crazy bullshit.

In 2000 R.T. Thorgrimm and I used to work together as professional Clock-Milkers, and Lunch-Break-Extenders for an import CD distro. We would hang out everyday and talk about music. We shared common interest like getting wasted, eating, laughing about funny shit, and HELLHAMMER. We would always rap about music for hours then clock out and do the same thing on the ride home in my pest control van. We introduced a lot of good music to one another. I gave him copies of G.I.S.M. and BULLDOZER records, and R.T. copied some FIELDS OF THE NEPHILIM and SOLITUDE AETURNUS albums for me. Since everyone in GEHENNA lived in a different state (which put SANGRAAL on hold too), and R.T.'s band MORGION were going through some line up shit, he and I decided that we had to start playing music together. We decided to call the band GRAVEHILL because if it was a good enough name for HELLHAMMER to use before they were HELLHAMMER, it was good enough for us. I suggested we have Damn Shane BastardDemon (who I worked with at a Bionic Records in Fullerton) play guitar. He's always been a good friend and his taste in music will be always fucking great. R.T. agreed and when I asked Shane of he wanted to play some sort of HELLHAMMER meets AUTOPSY, meets SODOM type of shit he replied "I've got 2 songs". We started to practice and before we knew it Shane had written a ton of amazing songs. BastardDemon, R.T. and I had arranged those songs together. The lyrics were all R.T. (I wrote like one or two lines). We had a great rehearsal room in Pamona. Things were going solid. We recorded this demo with our friend Phil White and Rusty Cavander at a warehouse that Phil's dad used for his company Winners Circle Auto Detail. The room had high ceilings and a great natural reverb. BastardDemon and myself wanted to release it only on cassette. R.T. wanted CDR's because he said it would be more accessable for people. We did both formats (about 50 of each) and about 3 dozen T-shirts. We went through all of the stuff in 2 days.
I think that is when the end started.
in 2001 MORGION had reformed and they shared our rehearsal space with us. R.T. wanted to focus on MORGION so he stopped coming to GRAVEHILL practice all together. Our studio caught on fire on a night that we were supposed to practice.
After that we never practiced with R.T. again and MORGION moved out of the studio.
R.T. did MORGION and KEEN OF THE CROW, and said he "Wanted to stick to playing epic sounding symphonic doom." BastardDemon and were cool with that cause we wanted to get high as fuck and make noise that was less part of a music scene and more just sheer sonic torture. So we formed DEVIL (scroll down and you'll get that junk sorted out).
Anyhow I moved away. in
July of 2006 Rhett emailed me to say he was doing a new thrash metal project with our dog Mikey Abominator from GASP and wanted to call it GRAVEHILL. I was like "Yeah man fine. Just don't do anything with the demo songs cause those are Shane's." He told me "ummm I gave 'em to this dude Aesop to release on his cassette only label". I was like "Wait... you what? C'mon man. Tell him to stop that shit cause you know that you can't do that without Shane's permission and I don't want to be in the middle of some fuck quarrel over this shit." He told Aesop to stop. I saw them at Amoeba Records in San Francisco 4 months later. I was pretty bummed. I felt like this fucking Aesop dude was stealing something from me. I vowed when I met him one day I'd punch him in the balls till his kids were born with black eyes.
What sort of dick with no fucking taste would do such a thing?
Amoeba sold out of them and I got over it.

Fast forward to last year. So I've got a computer now and it works good I just started to check out this blogging shit and it's super fucking cool. One of my favorite blogs is THE COSMIC HEARSE. The guy who runs it seems to have a grip on a lot of the stuff I like about music, and a great sense of humor. His name is Aesop. I think he is a really interesting dude.
hmmmm wait a second....Aesop... Aesop

Fast forward to today. I figured out that he is the same Aesop.
Boy do I feel dumb.

Anyhow R.T. and Mikey and I are all still friends, and GRAVEHILL is gonna play here soon. They wont play any of these jams because the Chief Rocker Mike Apocalypse isn't in the band anymore, but they'll still rage!

And Aesop... I will not punch you in the balls, but I will try to get you to buy me a beer.

Click this link and enjoy my wonderful voice and bass playing (except on the last song is R.T. singing).