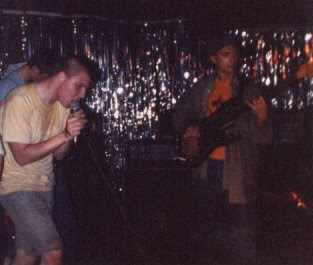 I bet upon first glance at this post you might say "Hey look its Eric Wood from the world famous MAN IS THE BASTARD". Well if so your right, but to be honest this is more about the bald dude that's yelling. His name is Bill Tuck. He used to come in the record store I worked at all of the time and is close friends with friends of mine. Every time I saw him I'd ask "When is the PILLSBURY HARDCORE discography coming out?" He would just kind of laugh and say stuff like "Nawww I don't know man. Nobody wants that shit." I asked him the same question for a year and a half straight and got the same answer. So when he told me he was thinking about putting together 100 copies of this discography for friends and folks that were into the PILLSBURY HARDCORE records I simply replied "Thanks dude. I'll take one! I'm glad I asked for it for a year and a half." Bill laughed and told me he would bring one by for me when it was done. I figured it would be another year and a half. I was wrong. 2 days later it was at the store in a baggie with my name written on it. The disc is a CDR and the covers were all hand cut and glued and hand numbered. The inserts are numbered as well and there a circular pice of paper with disc art that is also numbered. Bill went all out on this thing. I mean to do 100 of these in 2 days blew my fucking mind. Here is the breakdown of what's on the disc.

There is also a CD rom portion that has tons of pics like the one up there.

Anyhow, so yeah...Wood is cool and all, but Bill came through with some gold when I least expected it.