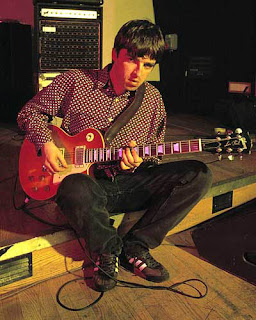 In 1995, Rhodes, D.C. and I moved from Reno back to San Diego. It was an odd situation, and we were living in an office space that was about the size of an handicap toilet stall. There was no bathroom in it we had to go down the street, or break into one of the abandoned offices which were filled with dirty needles and broken rock pipes from the other dead beats that were doing the same thing. I got pretty tired of this shit pretty quick. My friend Forrest Locke from ENEWETAK in the city of Orange was like "Yeah I guess you could come crash here in Orange if you hate it down there. We're friends dude. Plus you gotta here the new songs we got for the LP."
That pretty much settled it pretty quick.
I was up there in a day or two and lived in Fo's room in Orange for almost a year.
While I was living there Fo and I played the OASIS "What's The Story..." record CONSTANTLY. It was the sound track for every meal. Every car ride. Every night out. EVERYTHING!
Forest became a brother to me, and since then we've been through all kinds of shit. When I was living in Phoenix in 1997 he brought me a out a care package from Orange with "Be Here Now" and a ticket to go see OASIS in L.A.. We've played music together, we traveled in Europe together (getting wasted as fuck). He helped me move to Reno in 2004 and we got all pilled out and over caffeinated on the drive there. We were laughing, talking and listening to OASIS the trip. 10 hour drives ain't so bad when your doing 'em with somebody who you like hanging out with.
On last Sunday April 5th Forrest's dad, Garold passed away. It's been fucking my head up all week. G. Locke was pretty close to Fo, and any dad that would put up with with me living in their house for a year is a pretty great dude. I never saw him as happy as when all the kids and grandkids were piled up in one room. We're all gonna miss him.
Back in 1999 I gave Forrest a cassette called "The Noel Gallagher Super Tape" it was a mix I'd put together of a bunch of b-sides and live stuff that weren't on any of the albums. I lost my copy, and I'm sure Fo lost his. But this is pretty close to what track list on the tape was.
http://www.mediafire.com/?tzmiwt20k5n
Posted by ApocalypseWestCoast at 2:51 PM