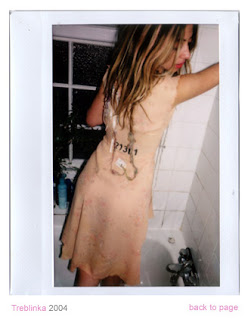 When I'm off from work and I don't have much to do, I sit around by myself in the dark, listen to music and get wasted all day long. It may sound shallow but honestly, I'm not that bad of a guy. The last couple of days have been pretty blurry, but a lot of fun. I've been meaning to post something but all I've been able to do is be upset with myself for spending all of my money on booze and dope which caused me to not have the money for travel. One of the things that I missed in January was the return of the almighty TREBLINKA. Even though Hellslaughter was not singing and playing guitar I knew the show would've been unreal because my favorite swedish musicians, the evil twins Tyrant and Hellbutcher from NIFELHEIM, filled in for him. Fuck!!! That must have been amazing! I suck for staying home and getting high in my room.
Anyhow I'm posting the double CD discography from TREBLINKA, and I thought I should look around online to find any pictures of the show that might be posted on the web. I looked for a while but everything I found were pictures of the death camp that the band was named after. Right when I was ready to use an old picture that has been seen a thousand times and is the most predictable one to see when your talking about the black metal legend TREBLINKA, I ran into this lil lady you see in the picture above.
Her name is Katie Jane Garside, and not only is she a singer in a wonderfully mediocre pile of shit band, but also a horribly pathetic and predictable artist, a model that mostly poses for out of focus pictures, and a wiz of a seamstress. It seems that she whipped up the wonderful dress she is wearing as part of her "Treblinka Collection". This piece was photographed in a shower too which shows how much of an eye for detail she had about creating the "throw back" look and feel of her new style of clothing which I like to term "extermination camp chic". Note the barbed wire tears, blood and dirt stains, as well as the numbers on the back of the flesh colored fabric. Th dress looks like the nifty little light shades that were made in the swell Polish fashion mecca known as Treblinka back in '43.
How "retro" yet so "fashion forward".

I feel a lot less terrible about myself for staying in my room in the dark, getting wasted, and listening to music right now. At least I'm not pretending to be good at anything, and making nazi couture dresses. Right?
Like I said I'm not that bad of a guy.