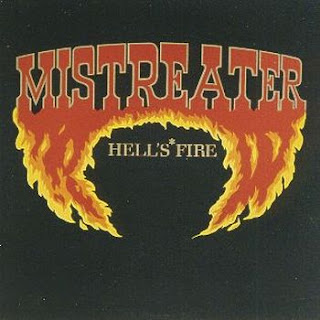 MISTREATER are just one more example of how fucking amazing Cleveland Ohio is when it comes to music. These four dudes put together a band to "Sound like UFO" but wound up with something far more sinister and heavy. The vocals kind of remind me of if Paul Di'Anno was in a drug induced trance or something. It's pretty haunting stuff, and coupled with NWOBHM style guitar tones this makes you wonder why any one ever invented solid state electronics. The first thing I heard from these dudes was on the CLEVELAND METAL comp. and I thought they were fucking berserk. I hunted for their stuff for a long time until finally my friend Charles from Cleveland got me set with copies of all of their early recorded output. Anyhow here it is for you to check out and head bang to.

Click the link below and get yourself some amazing heavy metal.