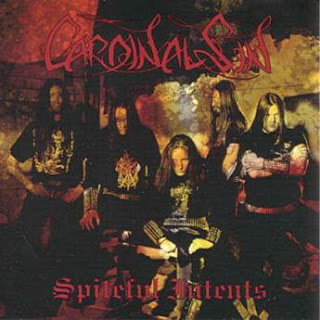 What is wrong with John Zwetsloot?
He played in DISSECTION and wrote some of their most greatest material. He did session guitars for NIFELHIEM playing on one of the greatest metal records of all time. He formed CARDINAL SIN and wrote and recorded this 4 masterpiece. They have everything needed to be fucking massive. CARDINAL SIN had an all star line up, great songs, a great recording and a name that implies that they embraced every sort of perversion and evil. But all of that didn't mean shit, because this is all they did. Since this 1996 release this was their only output. Everyone that I know who got this release was been holding their breath and anxiously awaiting more. Then it all kind of went away. No one seemed to talk about it, or even give a crap. And why is that? I'm not sure but according to Swedish metal lore John Zwetsloot was just a little late. He was supposedly nixed from DISSECTION for being late to practice, late to shows, and late to recording sessions. Now 13 years on there is still no second release from CARDINAL SIN, and I don't think there ever will be, because no one cares to wait around anymore.

Moral of the story... No matter how good you are set your alarm. Oversleeping can really screw things up for your carrier as a Satanic Heavy Metal superstar, or a pro bowler or whatever. No on like to be left waiting.

Ask just ask that fruit Axl Rose how things turned out for his "Chinese Democracy".