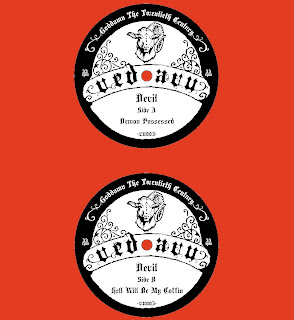 6 years ago myself and 3 other substance abusers climbed into a hot smoke filled shack and recorded what we thought was the perfect blend of BLASPHEMY, G.I.S.M., and DESOLATION ANGELS. We named the band DEVIL and gave a few close friends copies of the first tape. Like all good dope and diseases it eventually it got passed around pretty far from the original circle of deviants. We had quite a few folks try to talk us into releasing the demo but we held out. We decided to go in and record more stuff and try to see if these same fucks that asked to release it were able to rage along side us. I mean if you cant get high and drunk with someone and not try to kill them, then you shouldn't let them release your record! Anyhow all of the folks that made offers turned out to be pretty lame and light weight sissy-dogs. So both the first and second recording just kind of sat around for months. I moved up to Reno Nevada and kind of forgot about it and everybody moved on to different stuff. Shane was focused on DISCREET DOLL BAND. Kelly had a ton of work shit and a crazy turn of events that fucked up his living situation. Henry, like myself became an olympic style fuck up and wound up coming down and pretty hung over for a year or so. But we had all agreed to wait for the label that was going to be run by the best dudes to get fucked up with. No one could hang with us. So we all thought it would never come out.
Enter our friend the Scotsman Mike Kendric...
I got a call at 11:30 p.m. "Yo Mike it's me, Mike Kendric. I'm at this strip club in Reno. Do you still live here?" I replied "Sure man I'll come pick you up and we'll go get fucked up."
Long story short, $175.00 worth of $2 beers 4 grams of blow and 3 packs of cigarettes later, at 10:45 a.m. Kendric vomits on the stairs inside of Lil' Nugget, and walks over and orders an Awful Awful (a 3/4 pound burger that I'll talk about some other time), a shot of Jim Beam, and a Budwiser. Then he looks at me calmly and says "Before they kick us out of here, or the cops come, I wanted to tell you that I'm starting a record label with Jeremy Westphal. We're going only release stuff by bands that are our friends. You know, guys we could get wasted with who hate everything the rest of the world is doing. You know, kind of like an archive of all of our dogs, who've done so much great stuff that no one is ever going to hear unless we put it out. I still want to do the DEVIL tape. What do you think?" At that point i had to stop and make a choice. I went with the Awful Awful, and Jack and Coke. I told him that it sounded good but I would have to think about it for a little while.
15 minutes later it when we finished our burgers it was decided.
Anyhow these are the labels for the upcoming DEVIL "Heavy Metal For Satan" 7". It's gonna be a fairly small pressing but stay tuned for more info on it's release. I'll make sure to post any and all information as soon as it is coming back from the pressing plant.

PRAISE SATAN!!! WORSHIP THE DEVIL!!!
Posted by ApocalypseWestCoast at 3:59 PM